Omar Figueroa Motivated For ‘Must Win’ Showdown With Lipinets 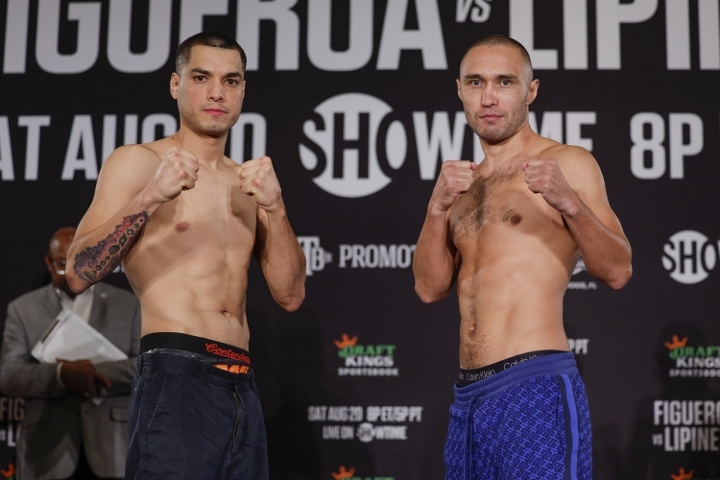 Omar Figueroa (28-2-1) admits that he isn’t sure how he will feel when he steps in the ring on August 20th against Sergey Lipinets.  The fight will take place at the Hardrock Hotel and Casino in Hollywood, Florida and top a Showtime quadruple header.

The 32-year-old former champion suffered a brutal beating in his last fight which resulted in a stoppage loss to Abel Ramos.  The fight occurred on the Andy Ruiz-Chris Arreola pay-per-view undercard last May.

The loss was his second in a row and at his media day last week, he revealed that he was recently diagnosed with a mental health disorder.

“I don’t know how I am going to feel. Last fight I thought I had a great camp. I don’t know if it was the mental issues I had or what. Something went wrong obviously but with this one we hope everything goes as planned,” Figueroa stated.

After the back-to-back losses, Figueroa knows that there is a lot on the line versus Lipinets.  For that reason he refuses to look down the road at other potential matchups that could present themself if he emerges with the victory.

“I am just worried about this fight. We aren’t worried about anything else. I don’t know how I am going to feel physically and mentally.  It is just so much has changed in the past year. I have gone through so much mentally especially after getting diagnosed. It has been tough. I have been doing this for 27 years now. I am just looking forward to the fight,” said Figueroa.

The Texas native was originally scheduled to face former four-time world champion Adrien Broner who pulled out of the fight with his own mental health issues.  This is now the second time a fight between the two has disintegrated.

They were first slated to square off in April, 2018.  Figueroa was forced to pull out of the fight with a shoulder injury.

Figueroa was very excited at the prospects of facing Broner but knows a win over a former champion in Lipinets will also be a big momentum booster to his career.

“This is what we have been waiting for a very long time.  Every fight is a fight we need to win. This comes at a point in my career where I have gone through so much and I recently got diagnosed with all of these mental health issues.  I just want to fight and be healthy and enjoy what I am doing,” Figueroa explained.

How to show the battery percentage of your Mac | Digital Trends