Two cargo barges stranded off Uran beach; The administration claims that the sailors are safe 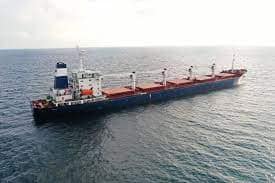 Two cargo ships got stuck in the rocky area on the beach near Mankeshwar and Navy area of ​​Uran on Tuesday and the local administration has claimed that the sailors of both the ships are safe.

A barge bound for the steel company in Pen got stuck in the coastal rocks near Mankeshwar and Naval area of ​​Uran due to strong winds. The name of one of these ships is M. V. Srikanth is

Preliminary information is that this barge is stuck 100 meters from the beach since Tuesday evening and it is estimated that there are 4 to 5 sailors on the barge. Tehsildar Bhausaheb Andhare of Uran has informed that we have contacted both these ships and the sailors on these ships are safe. It is also believed that these ships will go to sea again by Thursday.

Beating a tea seller for asking for a loan; Varieties from the Pinkcity area of ​​Ambernath East